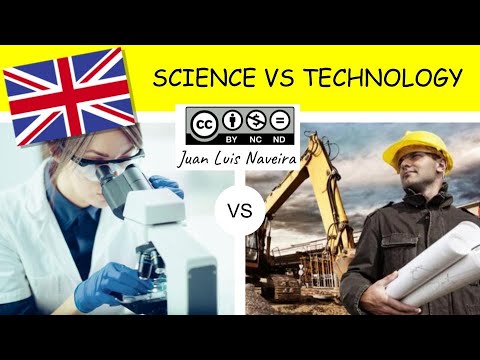 We are going to explore some of the differences between SCIENCE and TECHNOLOGY… because technology and science are actually very different things.

WHAT ARE THE DIFFERENCES BETWEEN SCIENCE AND TECHNOLOGY?
This table clearly illustrates the differences.
As you can see, the objective, the method, and the result are different for science and technology.

Regarding the objective:
In science, the ultimate goal is to EXPLAIN how the world works.
Why does wood float?
Why does the Moon revolve around the Earth?
How many kilos or Newtons per square centimeter can concrete withstand?
These questions are examples of the type of work done by scientists.
The motivation of the scientist is to explain these types of phenomena.
On the other hand; the goal of technology, which is to say, the goal of architects and engineers, is to solve problems.
The purpose of technology is to DESIGN AND CREATE OBJECTS TO MEET OUR NEEDS. Its purpose is not to explain anything… its purpose is to create useful objects.
For example, an engineer might use the scientific knowledge that explains why wood floats in order to build a ship and improve transportation.
They could use scientific knowledge regarding why the Moon revolves around the Earth to help them create a satellite that makes it possible to communicate by phone with someone on the other side of the world.
Or they might use data that measures the strength of concrete in order to design a building or a bridge.

Let’s move on to the next difference between science and technology and talk about methodology:
In science, the SCIENTIFIC METHOD is used…. The scientific method is a process based on making observations, asking questions, forming hypotheses about what and why something occurs, and, finally, designing and conducting experiments in order to assess the predictions. When this process leads to the discovery of novel information, it can be published for others to review and utilize. If the initial hypothesis is invalidated, a new hypothesis and experiment can be created.
For a hypothesis to be considered valid, it has to make predictions about natural events that will occur in the real world.
However, in technology we cannot work with hypotheses… for example, if we want to build a ship we cannot simply make hypotheses about whether our ship design is going to float or not… we have to be sure beforehand that it is not going to sink. Luckily, we are able to make functional ship designs because science explains why objects float.
So, keep in mind… architects and engineers rely on scientific knowledge to ensure their designs will be functional.
In technology, we use the TECHNOLOGICAL PROCESS that consists of the following steps:
– Recognizing our need
– Design a solution
– Plan your construction
– Build the object we have designed
– Verify that the whole process was successful
– And finally collect everything in a document

And finally, the third difference between science and technology is the end result:
The end result of science, or, what a scientist tries to achieve, is the publication of a law or a theory in a simple article–an article that explains something that, previously, no one knew about the functioning of the world (which makes that simple written article something quite important, indeed).
For an engineer or an architect, the result his or her work is an object: a building, a telephone, a simple pen… he does not need to write a book or an article about it–what he or she provides is an object that improves our quality of life (a job that is, as you can see, also very important).
This is the Tacoma Bridge in Washington State, USA:
The deck of this bridge was built with large amounts of steel and concrete–extremely resistant materials with which large skyscrapers and even bomb shelters are built… However, in this video, the wind is bending it as if it were made of paper.
Look at this man. He can walk perfectly well despite the wind. Winds of this speed does not necessarily prevent a person from walking normally. In fact, on this day the wind was 64 km/h.
How can 64 km/h wind twist a bridge like this?
Explaining how wind can break a bridge is the job of scientists, but using that knowledge to design bridges more safely and prevent this from happening again is the job of engineers and architects.
Science and technology always go hand in hand.
Scientific knowledge allows us to create new objects (for example, the study of optics allowed us to create better microscopes) and in turn microscopes allowed us to make new scientific advances.
Can you name five other technological objects that were clearly developed thanks to previous scientific knowledge and that later contributed to new discoveries?
Video published by –
source